Do you know the top 10 diabetes reversal success stories of October month?

If no, we would like you to go through all our top 10 participants which might be of your city, from your state, or from the same age group.

Because these top 10 participants of oct month could inspire you in taking steps towards your diabetes reversal journey.

Don't only get inspired, but do share this article which can also inspire your needful Friends and family members

Here are the top 10 diabetes reversal participants of October month A 57-year-old Founder/Director of Fun and Learn Preschool from Bangalore had a strong family history of diabetes. Got to know about her diabetes during a medical checkup.

That time, her HbA1c was too high 13.76. Before coming to FFD, was on tablets for diabetes, thyroid as well as hypertension.  Followed FFD protocols and became free of diabetes medicines in just 4 days and BP medications in 10 days.

Her whole story of super-duper achievement can be found in our freedom stories section. Is a 36-year-old Government Employee from Madhya Pradesh. He became diabetic at a very young age of 28 years due to work stress.

His health improved in all aspects after coming to FFD and according to him Dr Pramod Tripathi is the 'MAGIC MAN.' Is a 53-year-old IT professional from Bangalore.  She had no apparent symptoms of diabetes but felt dizzy and got to know about it.

She tried several things like diet and exercise but they helped very little.  Got introduced to FFD through a video of Dr. B. M.

Hegde and her life changed dramatically. She is now free of diabetes medicines and also her thyroid is under control.

You can find her detailed story in our Freedom Stories section. Is a young 25-year-old Software Engineer from Bangalore who came to know about his diabetes in 2019.

He lost 14 kg of weight and was in extreme pain for 2-3 months due to extremely high sugars.  Due to a high HbA1c of 16 had to be started on insulin.

Depressed, he looked for options and found information about FFD, joined it, and now he is in the happiest space.

To learn how he came down from HbA1c 16 to 6 after joining FFD, you have to read his full story. A 57-year-old from Jaipur works at a senior position as a Country Director, Fleet Forum.  Due to her work pressure plus long working hours and family duties, she tends to neglect herself which leads her to have diabetes.

She felt tired, irritable and medicines kept increasing. She joined FFD and is now not only free of medicines but a Mentor at FFD.

Her story from a lady who felt continuously tired and lethargic to a lady who could easily climb 6 stories without being breathless is amazing. He is a 65-year-old retired Banker from Bangalore.  This is a classic case where 21 years of diabetes got reversed after coming to FFD.

So not just 10 but 20+ years of diabetes was reversed in his case.  Due to a lung condition named pleural effusion, he had to be put on combination therapy of insulin + medicines.

Plus, he was suffering from high blood pressure.  After coming to know about FFD through a neighbor got some hopes and joined FFD.

Not only diabetes but he could overcome the comorbidity like BP to coming to FFD. A 55-year-old college lecturer from Kanpur knew somewhere that she might get diabetes due to family history.

Got to know about it when she suffered from a urine infection.  She also faced problems of obesity, fatty liver grade 1, acidity, hypothyroidism, hypertension, joint pain, etc.

FFD taught her to be aware of their own self, create goals, and finally achieve them.  And she successfully achieved freedom from 11 years of Diabetes. He is one of the 'creatinine warriors' of FFD. Mr. Bhalla, a 67-year-old retired Chief Bank Manager from Noida got to know about his diabetes around 30-35 years ago.

Was fed up due to medicines and peripheral neuropathy problems.  Joined FFD and wonderful things happened to him.

His diabetes medicines stopped, cholesterol improved, and creatinine levels which is the most difficult thing also improved.

Read his story to know how he got rid of his co-morbidity. Hers' is a beautiful story of how a participant turned to become a Mentor. Mrs. Mujawar is a 67-year-old retired bank employee from Pune.

Her multiple allergies required her to be on many medicines. Earlier diagnosed to be pre-diabetic.

But later on, post-retirement, sedentary lifestyle, and loneliness lead her to become fully diabetic.

Not only did she become free of diabetes medicines coming to FFD, but she also became FFD's mentor. A 68-year-old CEO from Hyderabad came to know about his diabetes 15 years ago.  Work pressure made his sugars pretty unstable and he had to be put on 18 units of insulin with oral medications.

He came to know about FFD through our past participant Mr. Gupta.  Joined FFD and has never looked back since then.

Do go through his story to know how FFD protocols successfully melted his belly fat and gave him freedom from 18 units of insulin.

October month's top 10 participants are just a sample.  FFD is nearing reaching another milestone of making 11K+ people free of their insulin, medicines, and other health conditions soon.

FFD's Diabetes Reversal program is equipped with a dedicated team of 6 experts who work one-to-one with participants on all the aspects of health - diet, exercise, inner transformation and medical aid and this makes FFD unique.

Do join our Holistic Transformation Program (HTP) to get customized and dedicated treatment as every individual, every diabetic is different! 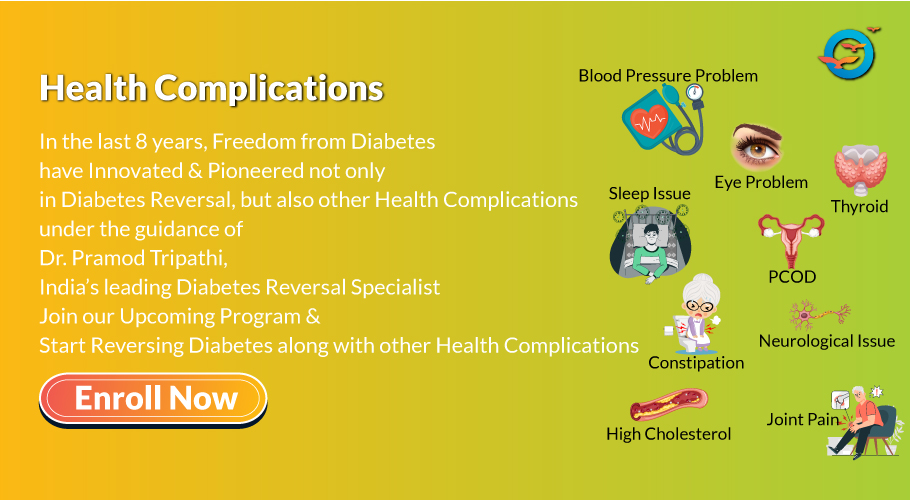